Technology advances in cycles. Moreover, the periods of evolution interleaved with revolutionary changes. And it seems that we are standing on the edge of the next revolutionary transition from experts-oriented GiS to Geospatial Intelligence solutions available for the much wider audience. The solutions which are easy to understand to a non-expert, easy to use, and affordable to small companies and individuals.

Geospatial intelligence brings more and more value to business intelligence products. As a result, the answer to the key question “where” start to play an extremely significant role by making business decisions.

Role of Geospatial Intelligence in our life

Imagine a holiday planning website where you can filter hotels by reachability. For example, visualize only hotels reachable within 10 minutes of walking from the beach or ski lift. Great, isn’t it?

Another case could be a property listing website. The website where you can choose a property with desired amenities nearby and optimize your commute time to the office or university. The website could help you, in addition, to find the best price-value ratio or investment potential based on your needs!

There are a lot of examples of geospatial intelligence appliance for business cases as well. For instance, an event planning service which takes an account of the living places of participants. Or office relocation website which suggests the best locations based on employees commute time and rental prices.

The increasing popularity of Geospatial solutions

Broad adoption of Geospatial intelligence can have an effect comparable to the transition from printed maps to digital maps. However, nowadays we can’t imagine our routine without smartphones and car navigation systems which guide us to the destination in an optimal way.

It is hard to believe, but just 15 to 20 years ago printed maps were the most common way to plan a route. Technologies like GPS, digital maps and computer-based routing were existing and moreover well-developed. But they were accessible only to experts, big organizations, and governments.

Geoapify mission to make geospatial intelligence affordable for everyone

At Geoapify, we see our mission in democratizing geospatial intelligence and underlying technologies. We intend to make it accessible, usable, and valuable for everyone who has unanswered “where” questions.

Our APIs provide everything you need to create a spatial solution from zero. Solution builder Mapifator helps to make custom maps with geospatial analytics technologies layers with graphical interface. 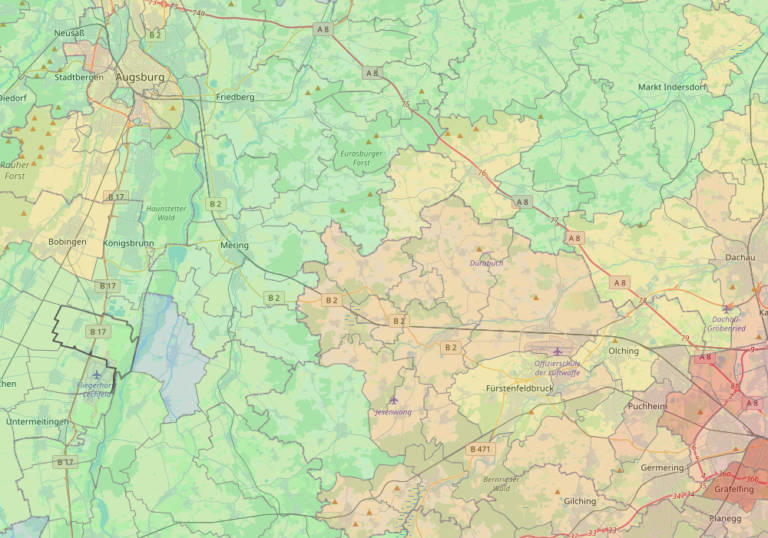 Maps are often used to visualize statistics. Demographical or socioeconomic data give a great overview of a location and allows to make conclusions about a territory. Often the data is shown are colored regions on the map which represent administrative boundaries or postcode boundaries.

What is the difference between the two types of boundaries?

OK, you have some data and would like to visualize it on a map inside regions. Firstly, you need to decide if you want to show it with administrative boundaries or postcode boundaries. Moreover, you think about how to combine/split up into bigger/smaller regions.

At the moment there are 2 common ways to break down a territory into regions:

For both cases, you need to keep in mind that a number of hierarchy levels may be different from country to country. Mixing the two options is also a bad idea, while then regions may intersect for some locations.

Postcode boundaries to visualize the data

So, you decided to visualize the data by postcode or ZIP code boundaries. This may be the simplest way to split the data by regions. But there are a few details you need to consider.

Firstly, you need to understand that postcodes are not translated into polygons in some standard way. Originally it’s service routes, which are represented as points or street sides. However, there approximated polygons for the post- or ZIP codes boundaries in most GIS data systems, but they may contain holes for some territories.

Secondly, don’t forget that in most cases postcode should go together with the country name. It could happen that locations in different counties have the same postcode. For example, the postcode 1204 could belong to Geneva, Switzerland or Dhaka, Bangladesh.

Usually, postcode boundaries have 3-4 levels starting from a country level.

Administrative boundaries to visualize the data

This way to divide territories is more natural from the GIS point of view. The planet is already divided into administrative regions. It’s possible to combine the data by countries and event by continents.

The administrative division has 3-4 levels from county level depending on the size of the territory.

Drawing boundaries on a map and performance

It often happens that GIS data has big volumes. It may badly impact browser performance when you keep too many polygons data in memory. Following a simple strategy may decrease the risk and make data visualization fast:

Where to get administrative or postcode boundaries polygons?

There are many ways to get the polygons data:

Geoapify offers APIs for administrative boundaries. Register and try it for free.

Which areas can I reach from a city center within 30 min by public transport? Where can I drive from my home within 1 hour? Or in other words, how far can I go from a location within a certain amount of time? This is the questions a travel time map or isochrone answer.

An isochrone is a line (or multiple lines) on a map, which bounds all possible locations reachable from a location within a given time. For example, it could all the places you can get from your working place within 30 min.

The form of travel time maps for different modes could look completely different. For example, 45 minutes isochrones for Paris below have various size and form.

Make a location decision with isochrones

Firstly, a travel time map visualizes how good is the connectivity of a place. In other words, it shows on the map if the place is easy to reach from different locations. Bigger the area of isochrone, the better connection it has. This might be useful when choosing a place for a new retail show or office.

Secondly, unions or intersections of isochrones could show hidden and often underrated spots on the map. So with an intersection, you can see areas reachable from multiple locations. This could be used when looking for a place with a good connection to multiple points of interest.

And unions show coverage for a location network. This could help to find a place for a new uncovered location to extend the retail network, for example.

Geoapify offers Isoline API to build travel time maps and provide operations on them. We support drive, bicycle, walking modes as well as transit mode for public transport. You can perform geometry operations like intersection or union on pair or multiple isochrones.

Register and try the Isolines API now for free!

We offer maps, API, and tools to build a custom map for your website. Create an attractive and interactive map for your business!

Any cookies that may not be particularly necessary for the website to function and is used specifically to collect user personal data via analytics, ads, other embedded contents are termed as non-necessary cookies. It is mandatory to procure user consent prior to running these cookies on your website.